Will only make glow in the dark BB's illuminate.

I will start off by saying this is quite possibly the coolest accessory for airsoft thats on the market today. And totally worth the $60. It is a clone of the $140 version put out by Tokyo Marui.

This device is attached to the barrel of the gun, and has an on and off switch located at the base of the unit. It is shaped like a silencer, so it adds a cool look to it as well.

The device works by having a sensor inside that can tell when a BB is leaving the barrel and entering the unit. As it detects the BB, it gives it a flash of light. When I got the unit I was curious if it could keep up with a high rate of fire, and yes it does. My M4, which I recently upgraded and fires 22 to 23 BB's per second, is not a problem for this unit. In fact it looks like a laser flowing out of the barrel because of how fast its firing.

If you have a gun with a positive (clockwise) threading, you will need to get an adapter to use this unit with your gun.

If you take a BB off and drop it through the unit, the BB will only glow brightly for about 3 seconds, but thats plenty of time for the BB to get from gun to target. The BB will then glow dimly for another 30 seconds or so.

The only con I have found is when it gives the BB a flash of light, that flash is visible on the business end of the gun. However you can not see the flash from the shooters point of view. While it looks impressive especially in the dark, it can give away your position, but then again, so can the glowing stream of BB's coming from your location. So no big deal. >>See this video as an example, start watching at about 2:45 and you'll see what I mean by the flash it produces (of course its exaggerated by night-vision in use) https://www.youtube.com/watch?v=jbJIRgpVExI

I see this item as a must have for night time play. If you want to pick one up in time for Operation Throwdown, its currently available at Evike: http://www.airsoftpost.com/product_info.php?products_id=31492

I should probably also mention, that while regular glow in the dark BB's aren't too bad as price goes, but the BIO kind get a little higher than you would think. I went with Bioval Tracer, which is $38 for a 5,000 pack.

The silencer tracer is interchangeable between weapons, and is much more versatile than a tracer magazine. The the magazine style you will need multiple magazines to keep shooting tracer bb's. With the silencer option you can use your regular mags as the silencer charges each BB that's fired.

I've also devised a plan to implement a "tracer" device into the hop-up unit. Once I have refined this a little better I will post more.

i could still use a bit of help getting my tracer unit going... 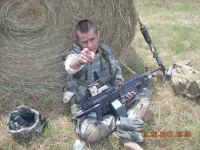 @shiftycat wrote:i could still use a bit of help getting my tracer unit going...

Let me know when you're free and I'll install it for you.

i am free possibly sunday, and monday

I know I am free on Monday.

Sunday a few of us are going up to the School Yard to take photos and do a little planning for Throwdown. You're welcome to come along if you would like to.

I know I am free on Monday.

Sunday a few of us are going up to the School Yard to take photos and do a little planning for Throwdown. You're welcome to come along if you would like to.

i would love to, i just have to make sure i don't have anything important going on. preparations for OKI are killing me

I think I'll have this on order shortly. ... and .25 bio tracers seem silly hard to find. Has anyone seen any?

@Coyote wrote:I think I'll have this on order shortly. ... and .25 bio tracers seem silly hard to find. Has anyone seen any?

The type I bought (which some of you have played with) are the Bioval .20 bio tracers. I had purchased them from a place in Canada, but just found them cheaper.