just got done running three mags through my elite force m4 and both the batterys and handle where the motor is held are extremly hot is that a bad thing or what ??? 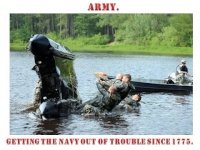 If you ran the thing full auto continuously I would expect it to heat up some.

If you were firing semi-auto at a conservative rate, it really shouldn't get hot.

There can be heat build up due to a short (but usually an inline fuse will blow out before it gets hot). Your motor could be too high causing it to work harder and heat up. That would also cause the motor to draw more juice from the battery heating it up.

Friction inside the gun could be causing it to work harder and heat things up... Really it could be any number of things. But it should not be getting extremely hot. This is especially bad with a LiPo battery (if that's what you're using.) You don't want one of those to catch fire.
_________________
chris.nielson@brigademilsim.com

i am running controld burst fire bout 5 rounds bursts give or take and semi. and not running LiPo's i am running two 8.4v Ni-MH 2/3a800mAH baterys and this was the first that the gun got that hot same with the batterys i figure it could also have been the intense heat of the weather or something