The Boulder Brigade regrets to announce a recently-discovered incident of Stolen Valor. Upon information coming to light in December of 2012, the matter was investigated, and the involved member is no longer with associated with our organization.  We accept the accountability for what happens within our team, and are not attempting to conceal or hide any of this information from the community as difficult as these situations can be on all parties affected. The following information is being provided to give transparency to a serious situation in our community, and the procedures we have implemented to safeguard against future occurrences within our organization.

Mel Romero joined the Boulder Brigade in May of 2011.  In his application he listed his relevant history and experience in part as being “”black cats" 11B infantryman, 2/28 infantry regiment”

During his time with the Boulder Brigade, Romero has made numerous other verbal and written claims of military service with the United States Army.

These verbal and written claims include:
Being enlisted in the United States Army.
Earning the rank of Specialist
His MOS: 11B Infantryman
Served with the 2/28 Infantry Regiment
Combat Experience in Fallujah, Iraq
Squad Machine Gunner, specifically with the M249 Squad Automatic Weapon
Experience assaulting locations on Blackhawk Helicopters
Having Post Traumatic Stress Disorder due to Service in Iraq
Requiring a service animal due to the Post Traumatic Stress Disorder
And others.

The Boulder Brigade contacted the 2/28 Infantry Regiment, who is known as the “Black Lions” not the “black cats” as indicated by Romero. The 2/28 indicated that from 2005 - 2011 they had never been deployed to Fallujah Iraq and further referred us to the Department of Defense Manpower Data Center for further records regarding an individual’s military service.

Documents obtained from the Department of Defense Manpower Data Center indicate that Romero had never served in the armed forces.  The records searched included the Army, Navy, Marine Corps, Air Force, NOAA, Public Health and Coast Guard. This this information was verbally confirmed with a representative from the Department of Defense over the phone.

During the steps of the investigation other questionable statements by Romero were discovered.  In 2009 he was interviewed by a publication doing an article on ROTC cadets.  Romero told the publication he would not be able to finish the program or ever serve in the Army due to being diabetic.

Romero was given multiple opportunities to respond, and subsequently resigned from the Boulder Brigade without ever proclaiming innocence or offering any explanation.  In the weeks following this matter, Romero contacted a Boulder Brigade representative by email and admitted to lying about being in the US Army.

Mel Romero is not the only person within the milsim community to have done something like this. Stolen Valor is a widespread and troubling issue.  Each time a situation like this occurs, it makes it more and more difficult for the milsim community to gain respect from the greater military and law enforcement communities. Stolen Valor is a major issue in the eyes of our community, and the eyes of others. The Federal Government is currently amending the original Stolen Valor Act to make it compliant with the Constitution, as well as a make it a federal crime.  There are also numerous websites dedicated to Stolen Valor.

The Boulder Brigade understands there will be varying opinions, and feelings on any individual violating the Stolen Valor Act. We do not support contacting and personally attacking the individual.  While it remains to be seen how he will conduct himself from here forward, we encourage him to learn from these indiscretions and improve himself as a person.  We encourage those close to him to be supportive and help him with this process.

Our organization has a high level of respect and appreciation for our U.S. Military Men and Women, past and present for their sacrifices, dedication and service to our country.

We have taken steps to safeguard against falling victim to this type of deception in the future.  All future applicants claiming military service will be asked to provide record of service, which will be verified through the Department of Defense Manpower Data Center.

Copies of documents are available upon written request.
admin@boulderairsoft.com

Written claim of service as an Infantry member during application to Boulder Brigade:
https://docs.google.com/file/d/0B3zdugbdZTsWYVM0TDFRbUZHMzQ/edit?usp=sharing

Written claim of "assaulting in on Blackhawks" while training with the US Army posted to the Boulder Airsoft Forum:
https://docs.google.com/file/d/0B3zdugbdZTsWSktKaHp5QUtreFE/edit?usp=sharing

Discovery of claim of being an Army ROTC Cadet during time he had claimed to have been serving as active duty, posted to the ASCO (Airsoft Colorado Forum):
https://docs.google.com/file/d/0B3zdugbdZTsWSG5iX1M4Y1J3MmM/edit?usp=sharing

Discovery of a news article in which Romero was interviewed and stated he would never be able to serve in the military:
https://docs.google.com/file/d/0B3zdugbdZTsWWlVKd2s3LTlMdVE/edit?usp=sharing

Discovery of MySpace posts made regarding college classes and being at home during the time period he stated he told others he was serving active duty in Iraq:
https://drive.google.com/a/boulderairsoft.com/?tab=oo#folders/0B3zdugbdZTsWNllqN09IRVV4Wm8

MySpace profile in which Romero listed himself as a "rent a cop" and a college student during the time period he claimed to have been active duty in Iraq:
https://docs.google.com/a/boulderairsoft.com/file/d/0B3zdugbdZTsWRjd4bEJNbEZYYlk/edit?usp=sharing

Records obtained from the United States Department of Defense Manpower Data Center concerning Mel Romero and their evidence showing he has never a member of the military.  This search included the Army, Navy, Marines, Air Force, NOAA, Public Health and Coast Guard.  Records are for all periods from 2005 - 2011.  2005 being the year Romero turned 18, until 2011 the year that Romero joined the Brigade and claims of previous military service began.

Romero's admission of dishonesty in an email sent from him on January 9th, 2013:  https://docs.google.com/file/d/0B3zdugbdZTsWQ1hJVG5jQXRwdzA/edit?usp=sharing

After being terminated from the Boulder Brigade for egregious dishonesty, Stolen Valor and other character and performance based issues, Romero has joined the team 303rd Wildcards. 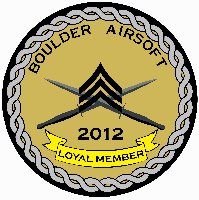